Biodiversity effects on ecosystem functioning in a 15-year grassland experiment 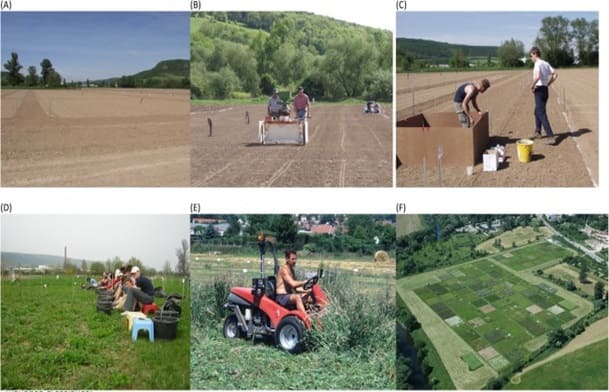 In the past two decades, a large number of studies have investigated the relationship between biodiversity and ecosystem functioning, most of which focussed on a limited set of ecosystem variables. The Jena Experiment was set up in 2002 to investigate the effects of plant diversity on element cycling and trophic interactions, using a multi-disciplinary approach. Here, we review the results of 15 years of research in the Jena Experiment, focussing on the effects of manipulating plant species richness and plant functional richness. With more than 85,000 measures taken from the plant diversity plots, the Jena Experiment has allowed answering fundamental questions important for functional biodiversity research.

First, the question was how general the effect of plant species richness is, regarding the many different processes that take place in an ecosystem. About 45% of different types of ecosystem processes measured in the ‘main experiment’, where plant species richness ranged from 1 to 60 species, were significantly affected by plant species richness, providing strong support for the view that biodiversity is a significant driver of ecosystem functioning. Many measures were not saturating at the 60-species level, but increased linearly with the logarithm of species richness. There was, however, great variability in the strength of response among different processes. One striking pattern was that many processes, in particular belowground processes, took several years to respond to the manipulation of plant species richness, showing that biodiversity experiments have to be long-term, to distinguish trends from transitory patterns. In addition, the results from the Jena Experiment provide further evidence that diversity begets stability, for example stability against invasion of plant species, but unexpectedly some results also suggested the opposite, e.g. when plant communities experience severe perturbations or elevated resource availability. This highlights the need to revisit diversity–stability theory.

Fourth, the Jena Experiment aimed to assess the effect of diversity on N, P and C cycling and the water balance of the plots, separating between element input into the ecosystem, element turnover, element stocks, and output from the ecosystem. While inputs were generally less affected by plant species richness, measures of element stocks, turnover and output were often positively affected by plant diversity, e.g. carbon storage strongly increased with increasing plant species richness. Variables of the N cycle responded less strongly to plant species richness than variables of the C cycle.

Fifth, plant traits are often used to unravel mechanisms underlying the biodiversity–ecosystem functioning relationship. In the Jena Experiment, most investigated plant traits, both above- and belowground, were plastic and trait expression depended on plant diversity in a complex way, suggesting limitation to using database traits for linking plant traits to particular functions.

Sixth, plant diversity effects on ecosystem processes are often caused by plant diversity effects on species interactions. Analyses in the Jena Experiment including structural equation modelling suggest complex interactions that changed with diversity, e.g. soil carbon storage and greenhouse gas emission were affected by changes in the composition and activity of the belowground microbial community. Manipulation experiments, in which particular organisms, e.g. belowground invertebrates, were excluded from plots in split-plot experiments, supported the important role of the biotic component for element and water fluxes.

Seventh, the Jena Experiment aimed to put the results into the context of agricultural practices in managed grasslands. The effect of increasing plant species richness from 1 to 16 species on plant biomass was, in absolute terms, as strong as the effect of a more intensive grassland management, using fertiliser and increasing mowing frequency. Potential bioenergy production from high-diversity plots was similar to that of conventionally used energy crops. These results suggest that diverse ‘High Nature Value Grasslands’ are multifunctional and can deliver a range of ecosystem services including production-related services.

A final task was to assess the importance of potential artefacts in biodiversity–ecosystem functioning relationships, caused by the weeding of the plant community to maintain plant species composition. While the effort (in hours) needed to weed a plot was often negatively related to plant species richness, species richness still affected the majority of ecosystem variables. Weeding also did not negatively affect monoculture performance; rather, monocultures deteriorated over time for a number of biological reasons, as shown in plant-soil feedback experiments.

To summarize, the Jena Experiment has allowed for a comprehensive analysis of the functional role of biodiversity in an ecosystem. A main challenge for future biodiversity research is to increase our mechanistic understanding of why the magnitude of biodiversity effects differs among processes and contexts. It is likely that there will be no simple answer. For example, among the multitude of mechanisms suggested to underlie the positive plant species richness effect on biomass, some have received limited support in the Jena Experiment, such as vertical root niche partitioning. However, others could not be rejected in targeted analyses. Thus, from the current results in the Jena Experiment, it seems likely that the positive biodiversity effect results from several mechanisms acting simultaneously in more diverse communities, such as reduced pathogen attack, the presence of more plant growth promoting organisms, less seed limitation, and increased trait differences leading to complementarity in resource uptake. Distinguishing between different mechanisms requires careful testing of competing hypotheses. Biodiversity research has matured such that predictive approaches testing particular mechanisms are now possible.