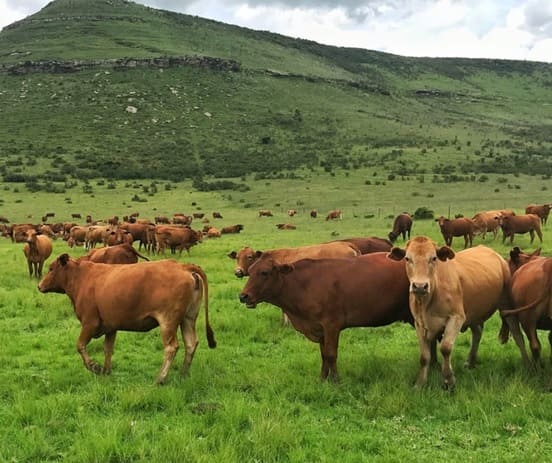 There’s no denying Americans eat a lot of meat. In fact, the average U.S. citizen eats about 55 pounds of beef a year, including an estimated three hamburgers a week, and the United States Department of Agriculture (USDA) expects that amount to increase by about 3 percent by 2025. This heavy reliance on animal protein carries a big environmental footprint—livestock production contributes about 14.5 percent of global greenhouse gas (GHG) emissions, with beef constituting 41 percent of that figure, thanks to the methane cattle produce in the digestion process and the fact that overgrazing can release carbon stored in soils.

Yet despite the benefits of careful grazing, the question remains: Can cattle be raised, fed, and slaughtered in a way that reduces their greenhouse gas emissions to a tolerable level?

A new five-year study that will be published in the May 2018 issue of the journal Agricultural Systems suggests that they can. Conducted by a team of researchers from Michigan State University (MSU) and the Union of Concerned Scientists (UCS), the study suggests that if cattle are managed in a certain way during the finishing phase, grassfed beef can be carbon-negative in the short term and carbon-neutral in the long term.

The research, led by Paige Stanley, who earned a Master’s degree in 2017 from MSU and is now a doctoral student at the University of California, Berkeley, states, “it is possible that long-term [adaptive multi-paddock grazing] AMP grazing finishing in the Upper Midwest could contribute considerably more to climate change mitigation and adaptation than previously thought.”

Rather than using the common method of continuous grazing, in which cattle remain on the same pasture for an entire grazing season, the researchers used the more labor-intensive method of AMP, which entails moving the cattle at intervals ranging from days to months, depending on the type of forage, weather, time of year, and other considerations. A herd of adult cattle on MSU grazing land served as their test population.

Though the study’s finding that strategic grazing can make a dent in the overall environmental impact of cattle runs counter to the widespread opinion among other researchers and climate activists, it is welcome news for advocates of regenerative agriculture.

Christine Jones, an Australian soil ecologist, believes the MSU paper makes an invaluable contribution to the ongoing discussion on the role livestock can play in mitigating climate change. “The research clearly demonstrates there are no net emissions of greenhouse gas with well-planned AMP grazing, due to the sequestration of soil carbon,” Jones said. AMP grazing provides “countless other ecosystem services,” she added, “including improved biodiversity, erosion control (soil is by far America’s largest export), increased soil water-holding capacity, and greater drought resilience.”

Managed Grazing in the Finishing Phase

Beef cattle’s lives are divided into three phases: the cow-calf phase from birth to weaning, which the animals generally spend in pastures, paddocks, or rangeland; the growth phase, which they often pass in open grazing areas; and the “finishing” phase in the three months prior to slaughter, during which 97 percent are fattened up with grain in feedlots of confined animal feeding operations.

While currently only 3 percent of cattle continue to graze during the finishing phase, earning the title of grass-fed beef, this sector is growing: Retail sales of organic, fresh grass-fed beef grew from $6 million in 2012 to $89 million in 2016, driven by consumers concerned about sustainability, health, and animal welfare.

The study authors chose to focus on the finishing phase because it represents the largest contrast between two livestock production methods, as the first two phases are broadly similar. To conduct their research, they measured methane emitted from the cattle’s digestive tracts and manure and added it to existing lifecycle data on the amount of carbon dioxide emitted during the production of cattle feed and mineral supplements and the amount of energy consumed on the farm and in transporting the animals.

Applying the manure to the pastures, adding no pesticides or soil amendments, they also tracked soil organic carbon and nitrogen levels. To see how their grazing method contrasted with feedlot finishing, they compared their data to the same parameters from a previously conducted two-year MSU feedlot study.

The extensive analysis showed a significant reduction in GHG emissions under the AMP grazing system, because the soil absorbed enough carbon to cancel out the methane emissions. (By contrast, the calculated carbon loss from soil erosion during feed crop production made for slightly higher feedlot emissions.)

“This carbon sequestration rate allowed us to turn a carbon positive into a carbon negative compared to the most common management system in the finishing phase,” explained Stanley.

The reason for the decreased GHG emission is this: soils tend to sequester more carbon when their microbiota and root systems remain intact; at the same time, manure left on the ground, rather than sluiced out of a feedlot and sprayed on a pasture, releases less nitrogen. (In addition to methane and carbon dioxide, nitrous oxide is a potent greenhouse gas, comprising about 18 percent of total beef cattle emissions.)

Overgrazing has long been observed to severely damage soils, with the implication being that the damage is caused by too many animals in an area. But, said Jason Rowntree, a study co-author and animal science professor at MSU, “It isn’t the amount of animals [that should determine grazing patterns], it’s the amount of time the animals spend in a certain spot.” Moving the cattle when they have eaten just enough forage to stimulate grass regrowth and prevent the incursion of woody plants and trees preserves the soil structure and doesn’t liberate the carbon already stored in the soil.

The study’s results apply only to the last part of the animals’ lives, Rowntree said—but, since nearly all cattle are raised on pasture in their first six months, implementing AMP in that phase could also offer significant results, even if feedlots don’t switch to grazing.

The Latest in a Long Tradition

The researchers’ insight is not completely new: it first arose in the early 20thcentury when the visionary French farmer André Voisin observed his cattle’s eating habits and concluded that overgrazing could be prevented by allowing more animals in a pasture for a shorter period of time than conventional grazing theories prescribed; Voisin published a book on “rational grazing” in 1959.

According to a 2013 Savory Institute report, if the method were used on “up to 5 billion hectares of degraded grassland soils,” it could sequester at least 10 billion tons of atmospheric carbon in soils—the approximate equivalent of five times the area of Europe taking up a year’s worth of global carbon emissions. The report further claims that this would lower “greenhouse gas concentrations to pre-industrial levels in a matter of decades.” Savory has been heavily criticized for lack of scientific rigor in these and other claims.

While the MSU–UCS study doesn’t go as far as the Savory Institute report, it does present a comprehensive analysis of the factors influencing net greenhouse emissions from livestock.

While some see numerous climate-related benefits to AMP grazing, daunting limitations still exist. Several factors drive many analysts to be skeptical that any cattle production can ever pare down net GHG emissions.

Tara Garnett, a food systems analyst and the founder of the Food Climate Research Network (FCRN) at the University of Oxford in England, calls the MSU work “a really useful study,” but also observes that it is “unclear how far this approach will lead to the same results elsewhere.” The study authors, too, are careful to stress that their results apply to Upper Midwestern conditions, and using a similar method in other ecosystem types will require further tailored study. They also acknowledge that while degraded land properly managed can take up large amounts of carbon, the soil will eventually reach equilibrium (meaning it will reach its carbon limit), and estimates of how long that takes vary widely.

In addition, soil types and the many other aspects of climate and ecosystems in different regions require detailed understanding and granular management of grazing—something many beef producers may be unwilling to undertake. And grazing requires twice as much land as feedlots.

As a result, reducing beef consumption is still the best use of energy, according to Janet Ranganathan, vice president for science and research at the World Resources Institute. “Beef is one of the least efficient foods to produce when considered from a ‘feed input to food output’ perspective,” she said. “Only about 1 percent of cattle feed calories and 4 percent of ingested protein are converted to human-edible calories and protein, respectively.”

David Briske, a rangeland ecologist at Texas A&M University, who declined to speak with Civil Eats about the study, echoed the skeptics’ sentiments, writing in an email that “the quest for a superior grazing system is a fool’s errand.”

Still, a growing number of cattle producers disagree with the doubters. Cory Carman, whose family’s 100-year-old ranch in northeastern Oregon produces range- and pasture-fed cattle, has seen numerous benefits from careful grazing practices. She works with about 10 other ranchers to market grass-fed beef directly to consumers, grocery stores, and restaurants.

One very promising practice, she said, is for ranchers to enlist farmers in the beef finishing phase. One farmer was initially very skeptical, but after he had grown a series of cover crops to rest his wheat fields and used cattle to “harvest” them, leaving the residue on the fields, he discovered that the soil was improving rapidly, Carman said. Reduced fertilizer and pesticide inputs, together with the income from the pasturage fees, makes the next wheat crop less expensive to grow.

“In the beginning, he took a lot of soil tests that now he says he doesn’t need,” Carman said. “The impacts that he’s seeing in his soil health are largely related to soil carbon sequestration and the microbiology that’s going on in the soil that none of us really understand.”

Thus, the path to a climate-friendly, science-based, ethically consistent, and practically achievable decision on beef production and consumption remains about as clear as the mud in a herd-trampled pasture. Still, said Rowntree, “I hope our paper can give our industry, combined with policymakers, a lens that can potentially help. We’re not trying to pit one group against another.”

Carman also acknowledges the complexity at hand, but feels the benefits to the soil she has seen are important to take into account. “Livestock are partly to blame for a lot of ecological problems we’ve got,” she said. “But we couldn’t repair these problems without livestock.”

Editor’s note: This article has been updated to reflect the research’s findings that this type of grazing can be carbon-negative in the short-term and carbon-neutral over the longer term.